It’s October 12th and NaNoWriMo preparation has officially begun! And here’s a cool picture of a bear. 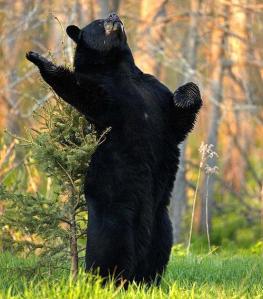 I’ve spent the last month playing around with a bunch of plot ideas, none of which were (or are, sadly) more than just a general idea of  what I’d like to do. This year, I don’t feel like revisiting any of my old ideas even though I have a pretty long list of stories that are waiting for me to write them. I want a completely new, stand-alone novel that will be both entertaining and profound.

So I eventually decided that I would write either a Cat Adventure Novel or a Gritty Political Novel…  without really having characters in mind for either. And since I’m more of a planner than a pantser, not being sure about what I was going to do was pretty annoying. So here I’ve transcribed a hyper-enthusiastic list of Pros I wrote on the 22nd of September (because Cons would make it even more complicated):

3. Seeing cities from the roof

5. Violence and darkness and scary

As you can see, I get rather enthusiastic when thinking about cats.

Okay fine, I get enthusiastic about pretty much anything.

And sight-seeing is apparently something I think both novels would have be capable of having, though I’m not entirely sure of what I meant by that.

In the end, I somehow came up with another idea that embodies the original emotions behind both plot bunnies and though it may seem a bit more like the second idea, it has the same crazy/funny/adventure tone to it that I really feel like writing nowadays. I’ll be posting the official synopsis sometime soon, when I can make it look a bit more coherent; because believe me, if I made a list of Pros about that it would still have a ridiculous amount of exclamation points in it.

But for now, the general idea is this:

Set in an alternate version of our own 1950s, in midst of a society that has managed to become exceedingly advanced in its technology despite continuing to be plagued by misogyny and racism, a young mixed-race journalist and her photographer friend discover a strange conspiracy lurking beneath the glittering surface of the speedily evolving Rock and Roll industry.

The idea will probably mutate about a million times before November ends, but this is what I have in mind at the moment. And speaking of plot bunnies: I usually actually sew a plot bunny before I start NaNo, but I don’t think I’ll have the time or tools to do so this year… so it’ll have to wait.

Now I’m off to browse through all the new content in the NaNoWriMo site! And see, I’m starting to get the hang of this having-a-semi-regular-blog thing…

Are you writing a novel this November? What will it be about?

Nasim Mansuri is a fiction and non-fiction writer from Paraguay, currently pursuing a B.S. in Chemical Engineering and Professional Writing, while writing for Hypable.com and editing for BahaiTeachings.org. She has completed three full-length fantasy and science fiction novels and actively writes fan fiction for fun. View all posts by Nasim Mansuri