My friend grasps my arm as we cross the street. I’m st 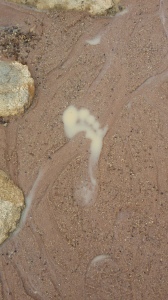 ill struggling to understand cars driving on the opposite lanes from what I’m used to. A man shouts, laughing as he calls out to her.

“Don’t touch Mzungu’s arm, the white will rub off on you!”

Mzungu means ‘white’. It’s a new name I was given in this country, one that marks me as rich, and possibly as proud. It has people surprised when I give up my seat to the elderly, and has them staring at me as I pass.

I’m not even white. Perhaps half of me is, but only one fourth of my bloodline is somewhat European. The other fourth is Iranian. The rest of me is Hispanic. But here, the contrast is striking. My name is Mzungu, and I have never been so famous.

When I step off the bus, the merchants murmur “Mzungu” between themselves. When I board a bus, a man looks through the window: “Marry me, Mzungu.” Children wave at me “Hello, Mzungu!”.  A man passes me on the street,  a tune playing on his phone. He presses it to my cheek. “Listen to this, Mzungu!”

Is this what people feel like, in other countries, when we stare at them for being different? I suppose one could easily twist these experiences into some sort of discourse on the supposed existence of ‘white oppression’. But that isn’t what this is. The context here is different than in North America or Europe. It is a framework built by hosts of the colonizers themselves, sometime in the past. The perception of wealth, even where it may not necessarily exist. Someone, at some point, has taught the masses that Mzungu means rich. That Mzungu means proud. That Mzungu is different.

Sometime after arguing with a man through a bus window — a marriage proposal, apparently — my friend points out that Tanzania only became an independent nation in 1961. It suddenly makes sense why the effects of colonialism still remain with such force; there are people alive today who experienced it firsthand. Paraguay, the main setting in which I’ve experienced the lingering remains of colonialism, became independent in 1811.

Of course, the situation in Paraguay was, in many ways, vastly different from what colonized Tanzania — or Tanganyika, at the time — was like. Slavers managed to quickly diminish our native population, and mestizaje did the rest of the job. Even now, comparing Paraguay to other countries in South America, there is very little diversity. I don’t think there is one black person in my entire city. While we have many immigrants from Europe and Asia, they arrived at a different time in our history, so colonialism didn’t really affect the way we view them. In Tanzania, however, it’s been a different story.

But the trends repeat themselves. I guess, in the end, we were all victims of the same mindset. The dehumanization of the native population, the the incredibly biased education, the weight of hundreds of years of suffering… they leave their traces in the people. In Paraguay, race is mostly homogeneous, at least in terms of black and white; but the same misconceptions that exist here in Tanzania exist there, in the hopelessness of the people, in the attitudes that seem to be marked by some form of emotional slavery — that we can’t control our own lives, that there is no point in dreaming of transcendence. I have seen it in students, and in the parents of those students; in the people who say “That’s nice, but people like us could never do that.”

It’s hard to shake off the weight of oppression, even after hundreds of years. While I can see it here when people call me Mzungu, in Paraguay it manifests itself in more subtle ways, usually as classism. The extremes of wealth and poverty can be easily traced back to a society where castes were introduced as a form of oppressing the people — racial castes, most of which have blended at this point to create more homogeneity, but the mentality remains. It is the mentality that discourages poor families from pursuing opportunities for a better education, that prompts gardeners and janitors and storekeepers to address professors and businessmen as ‘sir’, when there is no reason to do so. It is the mentality that normalizes the near-slavery of young girls in middle-class households, the dehumanization of maids, and feeds the systematic erasure of the indigenous population. It is what encourages rich children to aspire to Western ideals, while simultaneously discouraging poor children from going anywhere beyond high school.

It is what keeps my neighbors muttering amongst each other, “This is just how it is here,” and “You know how we are,” and “We will never change.”

The weight of it remains, and in Tanzania it is even heavier. There is, after all, a difference of 150 years in between the ‘official’ removal of European rule. If Paraguay, with such a head start, still hasn’t managed to shake off the shackles of dehumanization entirely, so much more difficult will it be for Tanzania, whose sufferings spanned a much longer, much more brutal abuse in the hands of slavery and the steady manipulation of tribalism. Paraguay’s enemy may now be a more ambiguous image of a wealthy politician, but in Tanzania the enemy is much more easily recognizable — he has always been, after all, Mzungu.

As I’m driven through the streets of Dar Es Salaam to somewhere I’m told I can purchase food and souvenirs, I watch the fields and groups of hard-working men and women give way to large Hilton-style hotels, and a brightly lit commercial centre. The prices there skyrocket, the food served is fetuccini and pasta alfredo, and the tourists lounge about with ease. If you walked away and crossed the street, you’d find yourself on the dusty asphalt with Tanzanian food and Maasai going about business. But not here — here is the comfortable world built to house what remains of the colonial yoke: the refusal to embrace local customs, the shaping of an entire culture to be in conformity to that of the tourists. It’s like a show, one which the locals watch from afar with humor in their eyes that’s sprinkled with resentment.

Colonialism is dead. But The Oppressor left behind him enough to live, in the thoughts, in the words of the people, in the belief that there is no moving forward. That there is no overtaking The Oppressor. That the battle is over, and we lost it centuries ago. Mzungu will step into your country, buy your food and take some pictures, and then will return to his glorious life of riches.

This is not Dar, my friend murmurs, this is Mzungu Town.

We cross the street and eat kachori, instead.

How do we take back what the Oppressor owes us? None of them remain. This country is independent, free of those who once sought to sell their children. As I walk in the streets of Iringa, I can’t see a single person of my skin tone or lighter. Here all are locals, living their own lives, immersed in their families and jobs and education. The Oppressor is gone. But the scars remain, and so they must be acknowledged — how can we be satisfied? Do we cling to the abasement, demean our own accomplishments, as a form of revenge? Do we allow it to make us bitter? Or do we forget what was done to us, and leave unacknowledged the wounds that have cut our societies open since the time of our ancestors?

But globalization is changing us, however slowly. Paraguay may have a 150-year head start, but only now are we starting to see significant progress. Youth are beginning to take a stand against corruption, education is being reformed and reshaped for the needs of the population. We have access to the internet, and that gives us access to the world. We are beginning to realize that we can create something new — something ours.

In Tanzania, it has already begun. Although the bitterness remains in the racial divide, in the silencing of the youth, change is steadily taking place. Community schools are slowly changing the perspective on education, turning what was once an outsider’s institution into an endeavor of the people. Women are beginning to speak up against domestic violence, and families are beginning to understand the steps that need to be taken to ensure a healthy lifestyle for their children.

We are learning to claim responsibility for our lives, to take them back from colonization. We are creating our own leaders to teach our own people, and we are learning to tolerate the symptoms of the disease of oppression that still remain. I can’t be angry at being called Mzungu.

We must be patient. It will take generations. As races mix and wealth becomes distributed more equally throughout the population, as our youth begin conversations that spark an understanding of our history untouched by the lenses of prejudice, we begin to advance… we begin to recover.

The small boy at the corn stand claps his hands and demands a piece. “Buy me one, Mzungu.” My friend bristles. She has grown tired. She breaks into the local language and asks the boy if he thinks that’s polite. “If you want to speak to someone, introduce yourself and ask their name. That is how you make friends.”

We break our corn into thirds and give him a piece. Bye, Hamsa.

Mzungu is real. He isn’t me, but then again, maybe he is. Maybe I am to the people of Tanzania just as I have been, at times, to the people of Paraguay. A foreigner. A wielder of privilege. Perhaps not someone to fear, anymore, but someone alien.

I wonder if Hamsa will eat our corn and remember. I hope he will grow up to understand that we shared. I hope things can be shared again, someday, and that The Oppressor doesn’t live through me, or through anyone else, in the color of my skin or in the blood in my veins.

He is not with us. Let us take him out of ourselves. He can’t stop us anymore.

Nasim Mansuri is a fiction and non-fiction writer from Paraguay, currently pursuing a B.S. in Chemical Engineering and Professional Writing, while writing for Hypable.com and editing for BahaiTeachings.org. She has completed three full-length fantasy and science fiction novels and actively writes fan fiction for fun. View all posts by Nasim Mansuri

4 thoughts on “Mzungu Town: A glimpse into the post-colonial recovery timeline”